Good morning and welcome to this week’s edition of In the Books, featuring Who’s Afraid Now: A Sgt Billy Williams short story by Wendy Cartmell. 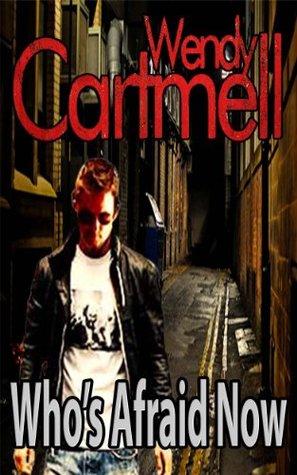 Don’t get mad – get even!
One thing SIB Detective Sgt Billy Williams has learned from his time in the British Army is respect. So he gets really mad when he sees a handful of kids treating his mum and dad and their neighbours without any. When he sees an opportunity of giving them a taste of their own medicine, well, he just can’t resist the challenge. Can Billy help with his own brand of vigilante justice? Or do his family just have to make the best of things?

My review: First, I have to say short stories like this are often hard to review without giving away too much, so I may be vague at times.

This was a fun and feel good read that shows the part of life we don’t often get to see. When we heard about soldiers, many times our first thoughts are about war or dealing with the aftermath. To read a story about a young man attempting to help out his home neighborhood and some kids while on leave was a refreshing break from the norm.

It gives us a great perspective into the mindset and heart of Sgt Billy Williams. He’s the type of person that many of us wish to emulate without coming across as a Mary Sue. It’s a great preview into what we can expect from the character and author in further installments.

I thought this was an excellent vehicle to introduce a character for an upcoming series, and look forward to reading about his future experiences.

Where do I begin? Well first I guess it's only fair to say that CP Bialois isn't my real name. It's a collaboration I made out of the three greatest pets anyone could ever want. My real name is Ed and I'm just an average person that has found a way to do what he loves. For as long back as I can remember I loved to pretend. Whether it was with my Transformers, GI Joe, or He-Man toys I loved to create intricate plots and have them fight it out. As a fan of horror, science fiction, action, and comedy I dare say my taste in movies are well rounded. Some of my favorites were Star Wars, Star Trek, martial arts, and anything with Swarzenegger in them. I'd write my own stories about the characters I saw in the theaters or TV or I'd just daydream about what I'd see myself as the hero of course. You can't have a daydream without beating the bad guys, getting the girl, etc. It's just not right to envision yourself as a flunky or sidekick. As far as books I loved Sherlock Holmes, Treasure Island, Dracula, and the normal assortment. My early love was the Star Trek novels, I'd read them or the Hardy Boys relentlessly. For a time I could tell you the plot of over a hundred books not to mention comics. I have to come clean and say that I learned to read because of comic books. I was bored, make that extremely bored when we started to read in school. Reading "the cat fell down" really didn't interest me. My dad, who continues to astound me with his insight to this day, figured comics would work. With that in mind he went to the newstand in town and bought issues of Donald Duck, Scrooge McDuck, Tales From the Crypt, and Spider-man. He patiently read through them with me until I picked it up. Whether it was him or the comics I learned to read in about two weeks and for a while few were as good as I was. For years after that whenever we'd go out he'd always spring for a couple of comic books for me. While it wasn't exactly the perfect beginning everything I've ever read or have seen has influenced me in some way and now is the time I'd like to share some of the ideas I've had over the years with all of you. I hope you enjoy my stories, they're always fun to write and I don't see myself stopping anytime soon.
View all posts by CP Bialois →
This entry was posted in book review, Uncategorized and tagged book review, British Mystery, Military Mystery, Prequel, Sgt Billy Williams, Wendy Cartmell, Who's Afraid Now?. Bookmark the permalink.