In the Books featuring Divorce Decree: A Novel by Nesly Clerge

Good morning and welcome to this week’s In the Books, featuring Divorce Decree: A Novel by Nesly Clerge. 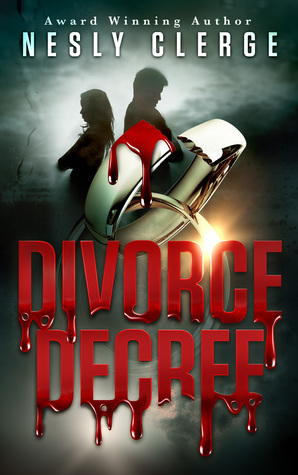 About the Book: TILL DEATH DO US PART. When Jake Adams uttered those words to his wife, Stephanie, he had an entirely different intention in mind. Industrious, determined, dedicated, devoted to his wife and children, he plans to give her, and them, the world. What Jake lacked in education, he made up for with willingness to learn and work hard so as to reap the rewards. In the end, it paid off—or so he believed. Stephanie should have been happy. And after all they went through together—the scares, dares, jobs, babies, successes, failures, lovers, separations, and second chances, why isn’t she content? What will it take? What is it that she wants him to do? As he struggles to discern truth from lies, it becomes a matter of being dead wrong or dead right. Find out who gets what’s deserved in this latest novel of emotional twists and turns by Nesly Clerge.

My Review: Few novels have the emotional twists and turns like Nesly Clerge’s.

The story itself if fast paced and well written, pulling us in from the first word. The author uses his phenomenal understanding of people and our emotions and thought processes to entangle us in a happy marriage that eventually turns sour as the communication between the couple breaks down, allowing their jealousy, anger, and frustration to get the better part of them.

The characters are all well written, and neither one of the main characters are right and both are wrong. As happens so often in real life, a simple explanation could’ve prevented so much, but us digging in our heals when we’re sure we’re right often leads to tragedy. There are so many times the story could have turned had it not been of one (Not saying who. No spoilers here.) could’ve moved beyond their pride and hurt feelings to listen or think beyond their own boundaries.

In many ways, the Jake and Stephanie are so real, it’s easy to see pieces of ourselves in this and treat it like a “What Not to Do” manual. On that note, I’d recommend relying on a professional opinion instead, but if it helps us to look inside ourselves, that could be the first important step, right?

I do have to admit, my favorite interactions were between Jake’s best friends, Pete and Melissa, who play great parts as Jake’s conscious and serve as great comic relief when they’re antagonizing each other. Of course, seeing Starks is a nice caveat. Crossovers rock when done right, and this is done right.

As usual, this is an awesome glimpse into the human condition by the author, and it’s a must read for anyone that loves well-written, reality based drama.

Where do I begin? Well first I guess it's only fair to say that CP Bialois isn't my real name. It's a collaboration I made out of the three greatest pets anyone could ever want. My real name is Ed and I'm just an average person that has found a way to do what he loves. For as long back as I can remember I loved to pretend. Whether it was with my Transformers, GI Joe, or He-Man toys I loved to create intricate plots and have them fight it out. As a fan of horror, science fiction, action, and comedy I dare say my taste in movies are well rounded. Some of my favorites were Star Wars, Star Trek, martial arts, and anything with Swarzenegger in them. I'd write my own stories about the characters I saw in the theaters or TV or I'd just daydream about what I'd see myself as the hero of course. You can't have a daydream without beating the bad guys, getting the girl, etc. It's just not right to envision yourself as a flunky or sidekick. As far as books I loved Sherlock Holmes, Treasure Island, Dracula, and the normal assortment. My early love was the Star Trek novels, I'd read them or the Hardy Boys relentlessly. For a time I could tell you the plot of over a hundred books not to mention comics. I have to come clean and say that I learned to read because of comic books. I was bored, make that extremely bored when we started to read in school. Reading "the cat fell down" really didn't interest me. My dad, who continues to astound me with his insight to this day, figured comics would work. With that in mind he went to the newstand in town and bought issues of Donald Duck, Scrooge McDuck, Tales From the Crypt, and Spider-man. He patiently read through them with me until I picked it up. Whether it was him or the comics I learned to read in about two weeks and for a while few were as good as I was. For years after that whenever we'd go out he'd always spring for a couple of comic books for me. While it wasn't exactly the perfect beginning everything I've ever read or have seen has influenced me in some way and now is the time I'd like to share some of the ideas I've had over the years with all of you. I hope you enjoy my stories, they're always fun to write and I don't see myself stopping anytime soon.
View all posts by CP Bialois →
This entry was posted in book review, In the Books, Uncategorized and tagged book review, Divorce Decree, In the Books, Nesly Clerge. Bookmark the permalink.

2 Responses to In the Books featuring Divorce Decree: A Novel by Nesly Clerge