In the Books featuring Bump Time Origin by Doug Cooper

Good morning and welcome to this edition of In the Books, featuring Bump Time Origin by Doug Cooper. 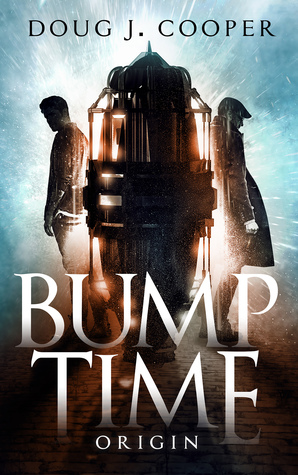 About the Book: On his twenty-fifth birthday, Diesel Lagerford meets “Twenty-Six,” a one-year-older version of himself. Twenty-Six tells Diesel that there are others like them in parallel timelines spanning the ages of twenty-five to sixty, and they can visit each other’s worlds using a machine called a T-box. He introduces Diesel to Lilah Spencer, the AI developer who maintains the T-box, and Diesel is smitten. But when he travels up the timeline, Diesel learns that Lilah will soon die under suspicious circumstances. Devastated, he and Lilah agree that a super-AI could solve the mystery of her death, and they race to create an artificial intelligence of extraordinary capability. But can they finish their work in time to save Lilah? And will the super-being help them in the ways they had hoped?

My Review: The author impressed me with his previous sci-fi series beginning with Crystal Deception, and he continued to do so with this book.

The characters are well-rounded and engaging, pulling us into their lives with an ease born of increasing familiarity as we continue reading. While their exchanges are fun, they can leave us scratching our heads at their decision making. While their motives for following the instructions sent to them are understandable, it’s interesting seeing their hesitation being rationalized throughout, and that only cements them further into our liking whether we like it or not.

The story, while fast flowing and engaging, is done in a way that, in my opinion, is the only or best way to tell the story. By jumping around, the layout utilizes the time traveling theories within and helps us become familiarized with both at the same time. This frees our minds to enjoy the story instead of trying to figure out where and when something happens.

The one down side to this is we’re introduced to so many Diesels, their plight to save Lilah becomes repetitive as the story nears its conclusion. The AI is partly to blame, as it mentions how many timelines it’s gone through, which lessens the impact of the tragedies to a certain degree.

This does, however, set up the next book in the series in a way that is sure to be fun and exciting when it comes out, so to the author: no pressure.

Where do I begin? Well first I guess it's only fair to say that CP Bialois isn't my real name. It's a collaboration I made out of the three greatest pets anyone could ever want. My real name is Ed and I'm just an average person that has found a way to do what he loves. For as long back as I can remember I loved to pretend. Whether it was with my Transformers, GI Joe, or He-Man toys I loved to create intricate plots and have them fight it out. As a fan of horror, science fiction, action, and comedy I dare say my taste in movies are well rounded. Some of my favorites were Star Wars, Star Trek, martial arts, and anything with Swarzenegger in them. I'd write my own stories about the characters I saw in the theaters or TV or I'd just daydream about what I'd see myself as the hero of course. You can't have a daydream without beating the bad guys, getting the girl, etc. It's just not right to envision yourself as a flunky or sidekick. As far as books I loved Sherlock Holmes, Treasure Island, Dracula, and the normal assortment. My early love was the Star Trek novels, I'd read them or the Hardy Boys relentlessly. For a time I could tell you the plot of over a hundred books not to mention comics. I have to come clean and say that I learned to read because of comic books. I was bored, make that extremely bored when we started to read in school. Reading "the cat fell down" really didn't interest me. My dad, who continues to astound me with his insight to this day, figured comics would work. With that in mind he went to the newstand in town and bought issues of Donald Duck, Scrooge McDuck, Tales From the Crypt, and Spider-man. He patiently read through them with me until I picked it up. Whether it was him or the comics I learned to read in about two weeks and for a while few were as good as I was. For years after that whenever we'd go out he'd always spring for a couple of comic books for me. While it wasn't exactly the perfect beginning everything I've ever read or have seen has influenced me in some way and now is the time I'd like to share some of the ideas I've had over the years with all of you. I hope you enjoy my stories, they're always fun to write and I don't see myself stopping anytime soon.
View all posts by CP Bialois →
This entry was posted in book review, In the Books, Uncategorized and tagged book review, Bump Time Origin, Doug Cooper, In the Books, Sci-fi, science fiction, Time Travel. Bookmark the permalink.